HoloLens 2 and the automotive industry

Alongside the aviation industry, the automotive industry has always been regarded as a driver of innovation when it comes to incorporating the latest technologies for development and production. Today’s CAD systems, for example, can largely be traced back to the experience of designers, who were able to draw important components of their cars on screen for the first time using early computers. It is therefore obvious that augmented reality was also adapted very early in the automotive industry.

Potential of the HoloLens 2 in the automotive industry

Until a few years ago, automotive development mostly took place in the same way. Although computers have played a major role in construction and design for decades, designers mainly made sketches and transferred them to elaborate life-size wood and clay models to make different model variants and ideas visually tangible. Above all, arbitrary drawing in perspective is a major advantage of digital systems.

Thanks to augmented and virtual reality, however, designs can no longer be assessed only on screens, but experienced intuitively in a real environment.

With HoloLens 2 data glasses, for example, decision-makers and developers can take a seat in an interior prototype and experience different variations of the dashboard, interior trim and other features as they will later be found in the finished vehicle. It is obvious that such processes can save immense costs. Instead of time-consuming manual production of a limited number of variants or the inadequate experience of a pure drawing, changes in the design and other adjustments can be implemented very quickly. Countless variants become representable and can be adapted or improved as needed without exploding time and costs in the development department. However, using the advantages of augmented reality correctly requires learning.

The transition to these systems becomes easier when powerful interfaces and proven software solutions are available. The HoloLens 2 is therefore ideally suited as an aid for the automotive industry.

It is also clear that by incorporating virtual reality into automotive development, not only time but also many resources can be saved. Thus, the development of vehicles not only proceeds faster and accelerates the integration of innovations, but also saves resources because sources of error are reduced. In addition to vehicle development, production plays a major role in the factories of automobile manufacturers. For each vehicle and each new model generation, extensive adjustments often have to be made to machines, tools and working environments. If augmented reality is used, frictional losses can be minimized here as well.

The optimization of work processes as well as the training and further education of employees during the implementation of new manufacturing methods are greatly facilitated by augmented reality.

This applies to all aspects before, during and after the introduction of new concepts, because thanks to decentralized networking, new adjustments and support measures can be implemented at any time. Worldwide if required. 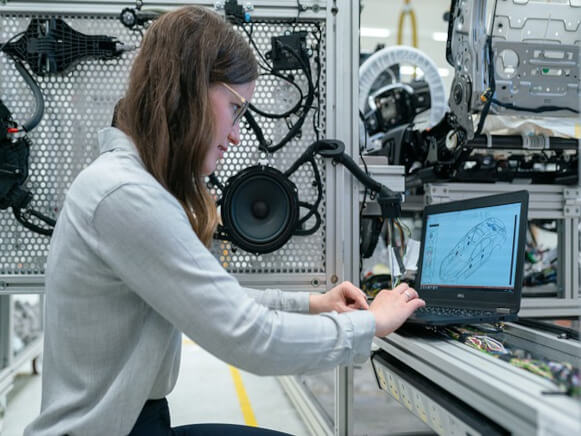 DO YOU HAVE ANY QUESTIONS? FEEL FREE TO CONTACT US!

Do not hesitate to contact us. In a first non-binding conversation we will find out how we can help you and whether our solutions fit you. We look forward to hearing from you!

Further advantages of augmented and virtual reality in the automotive industry Repair supported by augmented reality will be the norm in modern workshops in a few years’ time. This technology will make it just as easy to repair the latest generation of vehicles as it will be to work on classic cars for which there are no longer any experts on site. For example, experts at the automaker can provide direct assistance to the mechatronics technician in the workshop via data glasses such as the HoloLens 2.

Looking up bulky repair manuals or searching for spare parts on microfilm will then finally be a thing of the past. The advantage of an augmented reality repair in terms of efficiency and time is that repairs will be much cheaper in the future. After all, labor time is often the biggest cost factor for customers when it comes to car repairs.

Augmented reality can also change the automotive industry in direct sales at the car dealer. Thanks to data goggles in the dealer’s showroom, interested customers can experience any equipment variant and color scheme of the vehicle directly live and in full size from every conceivable perspective.

The days when brochures and catalogs could offer at best an incomplete impression of the actual vehicle of choice are over once and for all thanks to virtual reality in the automobile.

In conjunction with Industry 4.0 solutions, car manufacturers will also be able to respond much more flexibly to individual customer wishes in the future. Incidentally, this also applies to the supply of spare parts, if one thinks of the use of 3D printers in workshops or even in the garage at home, for example. Conclusion: The automotive industry is a pioneer in the use of augmented reality

Traditionally, successful companies in the automotive industry have taken advantage of modern technology. Whether CAD in vehicle development or robot-assisted finishing in the factory – for many years, development departments have recognized the potential of computer technology.

This is all the more true now that modern vehicles have become driving computers themselves and digital networking plays an important role even after purchase. But especially in development, manufacturing and sales, AR and VR systems like the HoloLens 2 are opening up unimagined possibilities. Added to this are the benefits in car repair, which can be accelerated and made more efficient through the use of augmented reality solutions.